Out of the Darkness of Ash of the Battlefield, we walk with our heads held high, even with bullet riddled armor we can not die, we are immortal warriors, we are DTLA.

Have been followingthis game for a while, saw some more footage yesterday on XBOX dashboard and decided to pre order todasy, looks absolutely ace.

Homefront is set in a near future America in 2027 when a nuclear-armed Korean People's Army invades the USA. The game is written by John Milius, who co-wrote Apocalypse Now and wrote Red Dawn. The beginning gameplay is reportedly set in Montrose, Colorado.
One of the major portions of the story arc is built around not only the growth of the North Korean forces over the years leading to the year 2027 (the year in which the game takes place), but also the economic downfall of the United States of America, and the unrest that seems to grip the nation before the invasion.

Homefront is speculative fiction, set in a near-future, post peak oil world that features a significantly declined United States, and a united Korea that has built a massive alliance in East Asia. The Gate Corporation (a major private military company) also plays a minor role. The game focuses on the collapse of the United States, subsequent occupation by the Greater Korean Republic - a united Korea under the rule of North Korea - and the American Resistance that fights said occupation. The player is invited to join the American resistance, "using guerrilla tactics, commandeering military vehicles, and utilizing advanced drone technology", but the player may join the North Korean Forces as well but only in multiplayer matches. The game will also feature vehicle based 32 player online warfare using dedicated servers. The game is planned to ship on Xbox 360, PS3 and PC

[edit] Backstory and TimelineThe antagonists in Homefront were originally intended to be Chinese, but were later replaced by North Koreans for two reasons: a possible backlash by the Chinese Ministry of Culture and the reality of economic interdependence between America and China that made the Chinese "not that scary.". Said Tae Kim, a former CIA field agent on the game's backstory, and a consultant: "we went to a very rigorous, academic research process to make sure to not only look at North Korea's current state but to look at historical examples how things could parallel and turn events. History repeats itself. From today to the day the invasion starts in the game, if you combine everything, the odds are very very slim this becomes true. But when you look at the storyline step by step, every step is a coin flip but a plausible step. So once you get there, it's plausible. And from there the next step is plausible as well. Even though the whole thing is fictional, it comes with plausible baby steps."

The finalized version of Homefront's timeline was released at end of January 2011.

Timeline2011: North Korea faces another UN sanction over its latest nuclear test.
2012: Kim Jong-il passes away, he is succeeded by his son Kim Jong-un.
2013: Kim Jong-un is awarded the Nobel Peace Prize and featured on the cover of Time magazine for his accomplishment of Korean reunification.
2014: American military withdraws from the Korean Peninsula. General Motors declares bankruptcy for the second time.
2015: The effects of peak oil are felt as gas prices reach up to 20 dollars a gallon. Russia cuts off all oil trade with Europe. Survivalist literature becomes best selling in America. China's influences diminish.
2016: America withdraws its military from Japan and other countries overseas, focusing on its instability back home. Texas splits from the United States, border bloodshed takes place as refugees from other states attempt to enter Texas.
2017: Martial law is declared in the United States as its infrastructure crumbles due to financial difficulties.
2018: Japan surrenders to the Greater Korean Republic, and is capitalized into a vassal state.
2019: The UN is dissolved.
2020: Canada closes its borders to Americans.
2021: Korean forces succeed in annexing many countries in East Asia. A new pandemic known as the Knoxville Cough begins to spread in the United States.
2022: Mexico closes its borders to Americans.
2023: The Knoxville Cough ravages the American public. The Korean People's Army reaches 20 million total personnel.
2024: The Greater Korean Republic starts launching their own satellites, claiming to bring a message of peace to the world.
2025: An EMP Burst is emitted by a Korean satellite, it completely destabilizes the United States infrastructure. This is followed by the Korean seizure of Hawaii and landings in San Francisco.
2026: The United States is split into two as Korean occupiers irradiate the entire Mississippi River and occupies the Western side.
2027: The United States Armed Forces are completely scattered.

David Votypka, the design director of Homefront, stated in an interview with G4TV that the gameplay will be based around guerilla style tactics, inspired by Half-Life 2. The same interview also contained information stating that one of the important facts concerning your surroundings is that they are built to try and build a connection with the user by using real companies and brands.

The multiplayer component of Homefront is focused on large-scale vehicle based combat reminiscent of Kaos' first title, Frontlines: Fuel of War. The defining innovation of Homefront's Multiplayer is its battle points system, which is an in-game currency that allows player to purchase weapons, gear and vehicles. Players earn points by taking objectives and getting kills and are forced to choose between many small purchases such as weapons versus larger, higher cost items like helicopters and tanks. It has been confirmed that the multi-player will support up to 32 players in one match, with 16 players on each team. Homefront on Xbox 360 will be getting a timed exclusive map called "Suburbs", which will be set in the Suburbs of America and will be infantry / drone only.

The Multiplayer takes place in the period before the U.S. Armed Forces were completely scattered.

This sounds good, but I doubt I'll get it.

20/20 for the essay. sounds like a good game. im getting flashbacks of freedom fighters.but can i be arsed...mmm. depends on the multiplayer. i just hope that the storyline isa not a happpily ever after one. i hate that its been done before. id love it if ur guys dies tryin or gets captured etc.nothing like a twist. 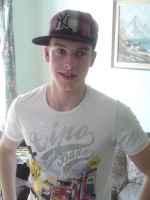